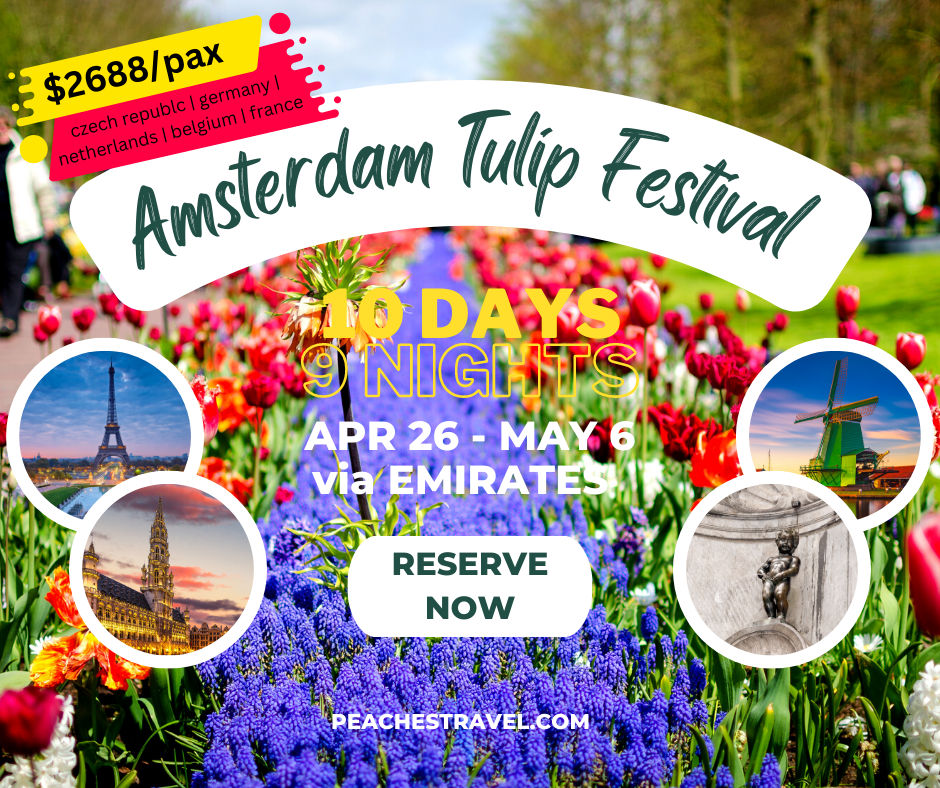 Guaranteed Deposit will need to settle (5 working days) upon received of Confirmation Invoice otherwise slot may be released
Non-refundable $500 per person to reserve
Full Payment 30 days before the Departure Date otherwise slot maybe released and deposit will be forfeited
For the passenger, who cannot pass the immigration process in any Int'l airport, the tour cost is non- refundable
The Package is non-refundable and cannot be rebooked. No refund for any unused tours, transportations, hotels and flights.
Rebooking can only be processed in the event of natural calamities and force majeure (war or threat of war, riot, civil strife, industrial disputes, terrorist activity, epidemics and pandemics), or mandated government cancellations. Refund is not an option.
In the event of sudden adjustment with the flight schedule made by the airline, the clients are expected to follow the new set schedule.
Rebooking might be considered once the passenger's result is POSITIVE of Covid- 19 but still under airline and hotel discretions.
If the group falls below 30, your Travel Agent has the right to cancel or reschedule the tour or a supplement fee may apply
The guarantee deposit will be forfeited if the visa application is denied.

*THERE IS NO REFUND FOR ANY UNUSED SERVICES. ITINERARY MAY BE SUBJECT TO CHANGE/REARRANGEMENT, DEPENDING ON ACTUAL GROUND SITUATION

Arrival in Prague.
WELCOME TO PRAGUE!
After Immigration Clearance and Baggage Claim. We will proceed with our private coach and
proceed with our 3-hour afternoon city tour. Let’s start the tour and explore all the Prague castles with
a local guide, visit Old Royal Palace including Vladislav Hall, St Georges Basilica, Golden Lane
with Daliborka Tower and St Vitus Cathedral.
Dinner on your own and Overnight in Prague.
Hotel Accommodation: NH PRAGUE CITY or similar

After breakfast and check out the group will travel to Karlovy Vary for a wonderful walk around the
main attractions of Karlovy Vary.
Get to know the air of this town through its buildings. Learn about how the local springs got their
names. Gaze at the gorgeous colonnades on your path. Enjoy the views of Karlovy Vary as you get
to know its development as a resort. Listen to the story of the Becherovka factory. Try mineral water
from the best springs of Karlovy Vary.
Depart for Nuremberg to visit Germany’s magnificent medieval city. To this day, the city’s skyline is
dominated by a mighty fortress built around 1140 during the reign of Emperor Conrad III.
Dinner on your own. Overnight in Nuremberg.
Hotel Accommodation: SEMINARIS HOTEL NURNBERG or similar

After Breakfast, Check out and Proceed to morning brief city walk with a local guide in the old town.
Continue our joinery to Heidelberg and learn all the history of the city from your guide as you visit
Heidelberg Castle, Old Bridge, Holy Spirit Church and more. Heidelberg attracts around a million
visitors from all over the world. The castle is the combination of several buildings surrounding an
inner courtyard, put together with a haphazard look. Each building highlights a different period of
German architecture.
Proceed to Cologne and overnight.
Hotel Accommodation: MERCURE KOLN WEST or similar

After Breakfast and Check out. Proceed to explore the historic old town and Cologne Cathedral. It is
one of the highest churches in the world and impresses everyone who sees it personally. Together,
Let’s discover many fascinating details from the outside while circumnavigating and taking a closer
look at this unique masterpiece of architecture.
Proceed to Amsterdam and overnight.
Hotel Accommodation: VAN DER VALK SCHIPHOL A4 (SUPERIOR) or similar

After Breakfast, Will visit the Keukenhof!
The most beautiful spring garden in the world! Keukenhof is the world’s largest and most famous
flower park, boasting more than seven million flowers in bloom between April and May.
Proceed to Zaanse Schans, where you will be able to take pictures of typical Dutch windmills that are
still in use today. Afterwards, we will drive to the Waterland area, pass through the beautiful villages
from this part of the country, and visit the clog workshop and cheese farm over there. Then, travel
back to Amsterdam city centre and discover this “ Venice of the North”.
Hotel Accommodation: VAN DER VALK SCHIPHOL A4 (SUPERIOR) or similar

After Breakfast, Check out and Proceed to travel to Brussels.
See the best of Rotterdam, the second largest city in the Netherlands, in the morning. The city’s
landmarks, including Rotterdam Central Station, and learn about Rotterdam’s past and present; The
Old Port or Oude Haven dating back to 1350, a former ocean liner and cruise ship that’s been
converted into a hotel.
Departure for Brussels. Visit Manaken Pis, the most famous landmark usually besieged by a large
crowd of tourists. The current statue, made in 1619 by Jérôme Duquesnoy the Elder, has been
stolen many times but can always be recovered.
During major celebrations, events and festivals in Brussels, the statue is known for being dressed in
full attire. Free time at Grand Place for shopping time.
Proceed to hotel for check in overnight.
Hotel Accommodation: NH BRUGGE or similar

After Breakfast, Check out and Proceed to travel to Brussels.
Explore Paris with a Seine River Cruise, one of the city’s top sightseeing cruises. Glide along the
water, passing the Eiffel Tower, the Louvre, the Musée d’Orsay and Notre Dame Cathedral, with
views of Paris’ famous sights. The 1-hour cruise departs from Pont Neuf, the oldest bridge in Paris,
with onboard commentary from a knowledgeable guide. Afternoon free time for shopping.
Hotel Accommodation: MERCURE LA DEFENSE or similar

After Breakfast at hotel.
Proceed and depart for the Palace of Versailles in the morning and visit the official residence of the
famous French Sun King in the Palace of Versailles. Take a guided tour around the palace to see the
King’s and Queen’s State Apartments and the Hall of Mirrors.
Proceed to Visit to La Vallee Village and free time to shop and explore
Then head outside on your own to explore the extensive gardens at your leisure
Go Back to hotel and Overnight.
Hotel Accommodation: MERCURE LA DEFENSE or simlar

DAY 09 – PARIS – MANILA (Breakfast and Meals On Board)